Using 9 to 16 Drives In Your Server?  Don’t Use A SAS Expander Do This Instead.

When buying a new server where the solution requires between 9-16 hard drives, and your quote has a SAS expander on it, you should ask your reseller to requote it using a higher end controller.  Why, you ask?

Avarisource clients, consistently ask when buying ProLiant servers to use a P408i controller and SAS expander, when configuring between 9-16 drives.  In this article we are going to explain the different controller types utilized in the HPE ProLiant series and explain why we usually recommend a better controller instead of a solution that utilizes a SAS expander.

To help determine the best combination of components, it would be helpful to understand what controller options are available.

All server system boards are equipped with a native controller, which is made up of 3 ports.  Each port allows 4 lanes of traffic, meaning the onboard controller can communicate with 12 drives.  You may think: “I am configuring my server with less than 12 drives, I should be good to go”, but that thought does not consider the significant limitations of the onboard controller.   For one, the onboard controller only supports SATA hard drives, and not SAS drives.  It also does not have cache and can’t be used for virtualization. 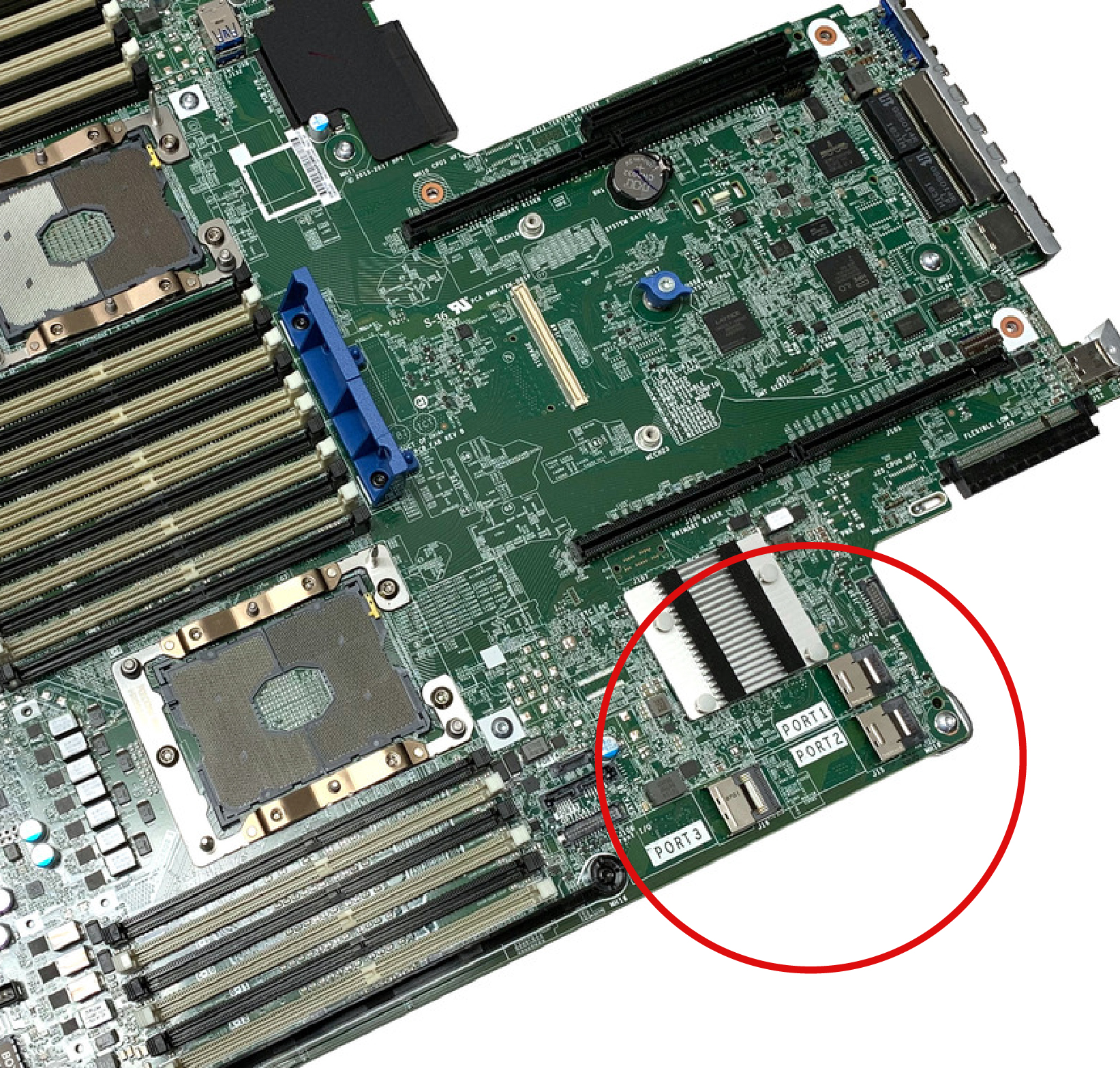 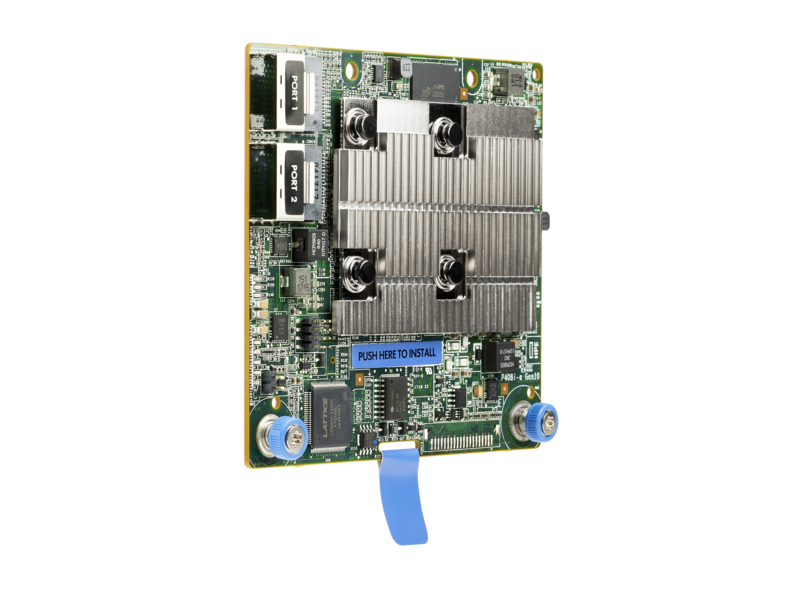 The AROC Controller (Adaptive RAID on Chip) is the option we see most often when we are asked to configure a server by our clients.  The AROC controller is a separate component that is installed into a dedicated socket on the system board.  It does all the things that the Onboard Controller can’t.  It can support SATA and SAS drives, it comes with cache, and it is the optimal option when you are looking to virtualize.

The PCI based controller does all the things the AROC controller does, but instead of sitting in a dedicated slot on the server’s system board, it occupies a PCI slot. 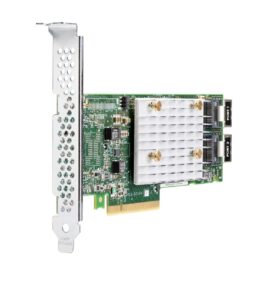 For those who are planning to configure their server with more than 8 drives, there are a couple of directions that can be taken to accomplish this.

What our clients typically request from us, which has become sort of the status, is to install a lower end AROC controller, like an HPE p408i, and a PCI based SAS expander.  Because the p408i has two ports, it supports 8 drives.  The SAS expander allows that same controller to support more drives, by adapting the two ports via SAS cable, then feeding multiple SAS cables from the SAS expander to the hard drive backplanes. 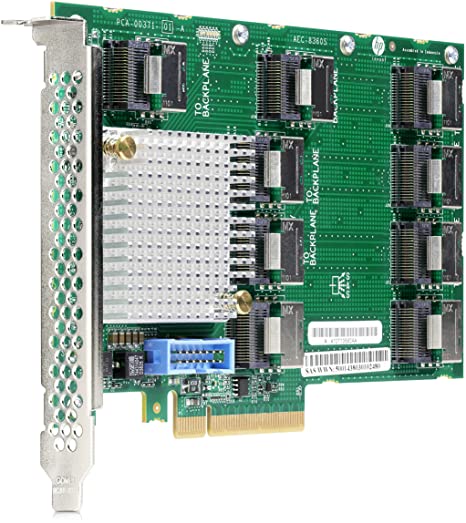 The other option is to upgrade the controller to something that can support more than 8 drives.  The HPE p816i is a higher-end controller for the HPE Proliant series of servers and has 4 ports rather than the 2 ports of the lower-end p408i; which means that the p816i can support up to 16 drives.

When configuring a server that has 9 to 16 drives, we tend to suggest going with the higher-end controller, like the HPE p816i, rather than going with a lower-end controller with a SAS Expander, and there are a couple reasons why.

The big misconception in the IT hardware marketplace is that choosing a lower-end controller and then adapting it with a SAS Expander is the most budget conscience move; however, that is often not the case.   If you were to consider average pricing from the larger distribution partners, at the time of this post, a p408i controller costs approximately $400.  Add a SAS Expander for an average approximate cost of $400 and your overall cost is $800.  An HPE p816i costs on average approximately $735 from the larger distribution partners, which is a modest savings for a more efficient, better performing component.

HPE’s p816i comes with 4GB of cache, where the p408i only provides 2GB.  In addition, the p816i comes standard with SMART Cache for servers configured with multiple processors; however, if you wish to have SMART Cache with the p408i, it requires a stand-alone license, which comes at an additional cost of approximately $200.

When utilizing a flash solution, more drives operating on the same controller lanes, runs a risk of having latency issues.  The P816i has more lanes leading to less traffic, reducing or eliminating the possibility of latency issues

The total cost benefit combined with better performance make considering a higher-end controller something worth taking a closer look.   Avarisource are experts in the HPE Proliant line of servers, check out the servers we can get for you at a considerable savings compared to distribution, and contact us today about your upcoming projects.

CONFIGURE A SERVERS
We use cookies on our website to give you the most relevant experience by remembering your preferences and repeat visits. By clicking “Accept”, you consent to the use of ALL the cookies.
Cookie settingsACCEPT
Manage consent

This website uses cookies to improve your experience while you navigate through the website. Out of these, the cookies that are categorized as necessary are stored on your browser as they are essential for the working of basic functionalities of the website. We also use third-party cookies that help us analyze and understand how you use this website. These cookies will be stored in your browser only with your consent. You also have the option to opt-out of these cookies. But opting out of some of these cookies may affect your browsing experience.
Necessary Always Enabled
Necessary cookies are absolutely essential for the website to function properly. This category only includes cookies that ensures basic functionalities and security features of the website. These cookies do not store any personal information.
Non-necessary
Any cookies that may not be particularly necessary for the website to function and is used specifically to collect user personal data via analytics, ads, other embedded contents are termed as non-necessary cookies. It is mandatory to procure user consent prior to running these cookies on your website.
SAVE & ACCEPT